Does being vaccinated with the tetanus vaccine prevent tetanus infection? A few facts:

A great article by immunologist Dr. Tetyana Obukhanych, along with citations, can be found HERE.

CDC estimates that in the 1920’s, about 1,300 people a year were infected with tetanus, based on the number of reported deaths and a 90% fatality rate. By 1947, before universal vaccination for tetanus began, U.S. tetanus cases had dropped to just 4 per million per year through better living conditions and better medical attention to wounds that created less opportunity for infection. Fatalities were 3.5 per million.

CDC also states in regard to all disease in the U.S. that:

“the incidence of many of these diseases had begun to decline because of public health improvements, implementation of which continued into the 20th century. Local, state, and federal efforts to improve sanitation and hygiene reinforced the concept of collective “public health” action (e.g., to prevent infection by providing clean drinking water). By 1900, 40 of the 45 states had established health departments. The first county health departments were established in 1908 (6). From the 1930s through the 1950s, state and local health departments made substantial progress in disease prevention activities, including sewage disposal, water treatment, food safety, organized solid waste disposal, and public education about hygienic practices (e.g., foodhandling and handwashing). Chlorination and other treatments of drinking water began in the early 1900s and became widespread public health practices, further decreasing the incidence of waterborne diseases.” 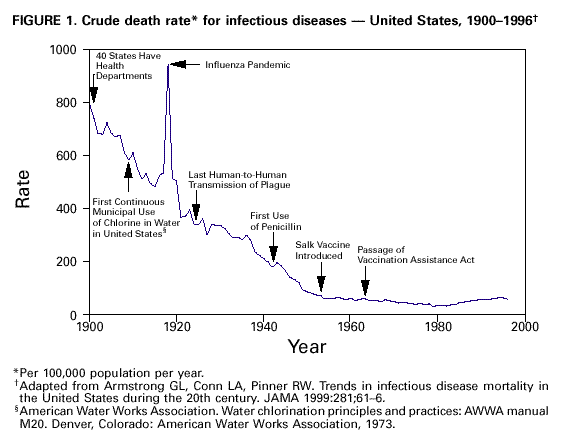