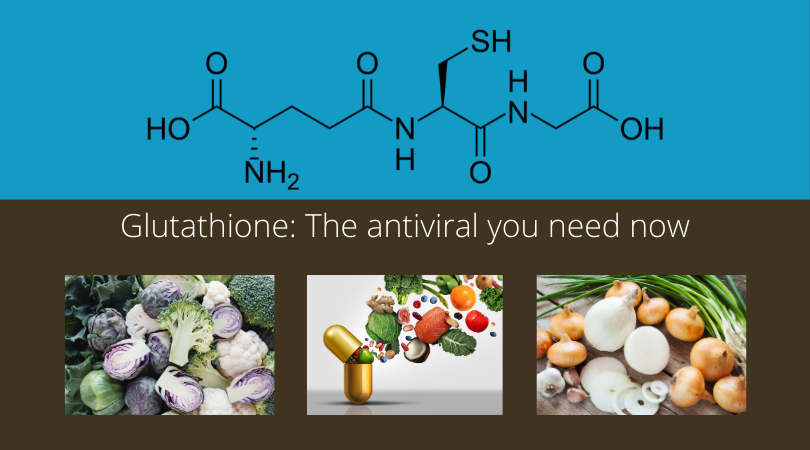 Glutathione: The antiviral you need now

Pre-Print of a new paper: Endogenous deficiency of glutathione as the most likely cause of serious manifestations and death in patients with the novel coronavirus infection (COVID-19): a hypothesis based on literature data and own observations

“Based on an exhaustive literature analysis and own observations, I proposed a hypothesis that glutathione deficiency is exactly the most plausible explanation for serious manifestation and death in COVID-19-infected patients. The major risk factors established for severe COVID-19 infection and relative glutathione deficiency found in COVID-19-infected patients with moderate-to-severe illness have converged me to two very important conclusions: (1) oxidative stress contributes to hyper-inflammation of the lung leading to adverse disease outcomes such as acute respiratory distress syndrome, multiorgan failure and death; (2) poor antioxidant defense due to endogenous glutathione deficiency as a result of decreased biosynthesis and/or increased depletion of GSH is the most probable cause of increased oxidative damage of the lung, regardless which of the factors aging, chronic disease comorbidity, smoking or some others were responsible for this deficit. The hypothesis provides novel insights into the etiology and mechanisms responsible for serious manifestations of COVID-19 infection and justifies promising opportunities for effective treatment and prevention of the illness through glutathione recovering with N-acetylcysteine and reduced glutathione.”

Efficacy of glutathione therapy in relieving dyspnea associated with COVID-19 pneumonia: A report of 2 cases

Glutathione (GSH) is a peptide (smaller versions of proteins) that contains one amino acid residue each of glutamic acid, cysteine, and glycine. These are found  in plants and animal tissue, but we often don’t get enough of them because they are easily destroyed by cooking. Additionally, glutathione is used rapidly by exposure to toxins, infections, and some pharmaceuticals, leaving us depleted when we need it the most. Supplementation is essential during these critical times of depletion.

“Reduced secretion of Th1 cytokines, which is associated with GSH depletion, could weaken the host defenses against viral infections.” (PMID: 32123833)

Glutathione “is essential for the viability and function of virtually all cells” (PMID: 9050888).

Dr. Edward Fogarty says, “Precursors to GSH are antiviral software for every cell.”

Some science to explore:

“A unique formulation of multiple amino acids inhibits the replication of Zika virus by up to 90 percent in human and non-human primate cells, according to a study led by Georgia State University.

The study authors tested a novel formulation of three free-form amino acids (FFAAP)—cystine, glycine and glutamate, as well as a minute amount of selenium—that was previously known to increase biosynthesis (or production) of glutathione, an antioxidant, within cells. Intracellular glutathione has been shown to adversely affect certain viruses, including HIV, suggesting that it could be an active cell defense.”

Glutathione (GSH), a cysteine-containing tripeptide, is essential for the viability and function of virtually all cells. In vitro studies showing that low GSH levels both promote HIV expression and impair T cell function suggested a link between GSH depletion and HIV disease progression. Clinical studies presented here directly demonstrate that low GSH levels predict poor survival in otherwise indistinguishable HIV-infected subjects. Specifically, we show that GSH deficiency in CD4 T cells from such subjects is associated with markedly decreased survival 2–3 years after baseline data collection (Kaplan–Meier and logistic regression analyses, P < 0.0001 for both analyses). This finding, supported by evidence demonstrating that oral administration of the GSH prodrug N-acetylcysteine replenishes GSH in these subjects and suggesting that N-acetylcysteine administration can improve their survival, establishes GSH deficiency as a key determinant of survival in HIV disease. Further, it argues strongly that the unnecessary or excessive use of acetaminophen, alcohol, or other drugs known to deplete GSH should be avoided by HIV-infected individuals.

During aging, glutathione (GSH) content declines and the immune system undergoes a deficiency in the induction of Th1 response. Reduced secretion of Th1 cytokines, which is associated with GSH depletion, could weaken the host defenses against viral infections. We first evaluated the concentration of GSH and cysteine in organs of old mice; then, the effect of the administration of the N‐butanoyl GSH derivative (GSH‐C4) on the response of aged mice infected with influenza A PR8/H1N1 virus was studied through the determination of GSH concentration in organs, lung viral titer, IgA and IgG1/IgG2a production, and Th1/Th2 cytokine profile. Old mice had lower GSH than young mice in organs. Also the gene expression of endoplasmic reticulum (ER) stress markers involved in GSH metabolism and folding of proteins, that is, Nrf2 and PDI, was reduced. Following infection, GSH content remained low and neither infection nor GSH‐C4 treatment affected Nrf2 expression. In contrast, PDI expression was upregulated during infection and appeared counterbalanced by GSH‐C4. Moreover, the treatment with GSH‐C4 increased GSH content in organs, reduced viral replication and induced a predominant Th1 response. In conclusion, GSH‐C4 treatment could be used in the elderly to contrast influenza virus infection by inducing immune response, in particular the Th1 profile.

PMID: 27147856 A Review of the Evidence Concerning Hepatic Glutathione Depletion and Susceptibility to Hepatotoxicity After Paracetamol Overdose

Acetaminophen (APAP)-induced hepatotoxicity accounts for nearly half of acute liver failure cases in the United States. The doses that produce hepatotoxicity vary considerably and many risk factors have been proposed, including liver inflammation from viral hepatitis. Interestingly, inflammatory stress from another stimulus, bacterial endotoxin (lipopolysaccharide, LPS), renders the liver more sensitive to hepatotoxicity from numerous xenobiotic agents. The purpose of these studies was to test the hypothesis that inflammation induced by LPS or infection with reovirus increases sensitivity to APAP-induced liver injury. For LPS-induced inflammation, C57BL/6J mice were treated with either saline or LPS (44 x 10(6) EU/kg, ip) 2 h before treatment with APAP (100-400 mg/kg, ip) or saline. No elevation in serum alanine aminotransferase (ALT) activity was observed in mice that received vehicle or LPS alone. LPS co-treatment produced a leftward shift of the dose-response curve for APAP-induced hepatotoxicity and led to significantly greater tumor necrosis factor-alpha (TNF) production than APAP alone. Reovirus serotype 1 (10(8) PFU, iv) induced inflammation in Balb/c mice as evidenced by increases in hepatic mRNAs for macrophage inhibitory protein-2, interleukin-6, and TNF. Co-administration of reovirus and APAP at doses of 450 and 700 mg/kg (2 h after reovirus) led to increases in serum ALT activity, whereas neither reovirus nor APAP alone produced liver injury. Consistent with the increases in serum ALT activity, histopathologic examination revealed centrilobular necrosis with marked neutrophilic accumulation only in livers of mice treated with LPS/APAP or with reovirus/APAP. The results suggest that normally noninjurious doses of APAP are rendered hepatotoxic by modest inflammation, whether bacterial or viral in origin.

Background: antipyretic drugs are routinely administered to febrile patients with infection in secondary care. However, the use of antipyretics to suppress fever during infection remains a controversial topic within the literature. It is argued that fever suppression may interfere with the body’s natural defence mechanisms, and may worsen patient outcomes.

Method: a literature review was undertaken to determine whether the administration of antipyretic drugs to adult patients with infection and fever, in secondary care, improves or worsens patient outcomes.

Conclusion: the evidence does not currently support routine antipyretic administration. Considering patients’ comorbidities and symptoms of their underlying illness will promote safe, evidence-based and appropriate administration of antipyretics.

PMID: 11130213 Effect of Antipyretic Therapy on the Duration of Illness in Experimental Influenza A, Shigella sonnei, and Rickettsia ricketts infections

Study Objectives. To determine whether antipyretic therapy prolongs the course of experimental influenza A, Shigella sonnei, and Rickettsia rickettsii infections.

Interventions. Subjects from the six influenza A studies were challenged intranasally. If they met certain criteria, they were offered aspirin or acetaminophen for symptomatic relief. Subjects from the three Shigella studies were challenged with the bacteria and then given trimethoprim‐sulfamethoxazole. Acetaminophen also could be administered. In the one R. rickettsii trial, subjects were inoculated intradermally and treated with tetracycline. Again, acetaminophen was administered for symptomatic relief.

Measurements and Main Results. Data, excerpted from subjects’ study records, were evaluated using Wilcoxon tests, Spearman’s correlation coefficients, and multiple regression analysis. Two‐tailed hypotheses with a value of 0.05 were used for all of the analyses. There was a striking correlation between antipyretic therapy and duration of illness in subjects infected with influenza A and S. sonnei, but not R. rickettsii.

A double-blind, placebo-controlled trial was conducted to study the effects of over-the-counter analgesic/antipyretic medications on virus shedding, immune response, and clinical status in the common cold. Sixty healthy volunteers were challenged intranasally with rhinovirus type 2 and randomized to one of four treatment arms: aspirin, acetaminophen, ibuprofen, or placebo. Fifty-six volunteers were successfully infected and shed virus on at least 4 days after challenge. Virus shedding, antibody levels, clinical symptoms and signs, and blood leukocyte levels were carefully monitored. Use of aspirin and acetaminophen was associated with suppression of serum neutralizing antibody response (P less than .05 vs. placebo) and increased nasal symptoms and signs (P less than .05 vs. placebo). A concomitant rise in circulating monocytes suggested that the suppression of antibody response may be mediated through drug effects on monocytes and/or mononuclear phagocytes. There were no significant differences in viral shedding among the four groups, but a trend toward longer duration of virus shedding was observed in the aspirin and acetaminophen groups.

Study objective To determine whether acetaminophen affects the duration or severity of childhood varicella.

Patients: Seventy-two children between 1 and 12 years of age entered the study. One child was withdrawn because of high fever, and three children did not complete the study; 31 received placebo and 37 received acetaminophen.

Interventions: Acetaminophen, 10 mg/kg/dose, was given at 8 am, 12 pm, 4 pm, and 8 pm for 4 days. Placebo was given to the control group. Itching, appetite, activity, and overall condition were measured for 6 days. The time to last vesicle formation, time to total scabbing, and time to total healing were measured until complete resolution of the exanthem.

Conclusions: These results provide evidence that acetaminophen does not alleviate symptoms in children with varicella and may prolong illness.

The role of glutathione (GSH) in the in vitro infection and replication of human herpes simplex virus type 1 (HSV-1) was investigated. Intracellular endogenous GSH levels dramatically decreased in the first 24 h after virus adsorption, starting immediately after virus challenge. The addition of exogenous GSH was not only able to restore its intracellular levels almost up to those found in uninfected cells, but also to inhibit > 99% the replication of HSV-1. This inhibition was concentration-dependent, not related to toxic effects on host cells and also maintained if the exogenous GSH was added as late as 24 h after virus challenge, i.e. when virus infection was fully established. Electron microscopic examination of HSV-1-infected cells showed that GSH dramatically reduced the number of extracellular and intracytoplasmic virus particles, whereas some complete nucleocapsids were still detected within the nuclei of GSH-treated cells. Consistent with this observation, immunoblot analysis showed that the expression of HSV-1-glycoprotein B, crucial for the release and the infectivity of virus particles, was significantly decreased. Data suggest that exogenous GSH inhibits the replication of HSV-1 by interfering with very late stages of the virus life cycle, without affecting cellular metabolism.